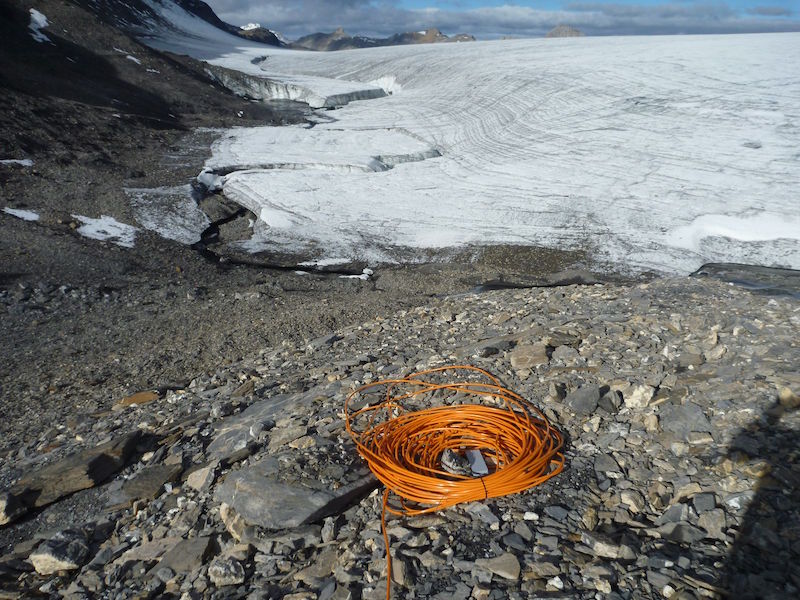 The glaciers of the Alps are in constant flux. After thawing in the spring and summer, lakes can appear whose levels have to be continuously monitored to detect floods at an early stage. Dependable pressure sensors, level sensors und data loggers are in need here.

The internationally active Swiss company Geopraevent develops, installs and operates high-grade alarm and monitoring systems for various natural hazards, including avalanches, landslides and floods. According to the task and local conditions, the systems are individually designed and implemented. At present, more than 60 alarm and monitoring systems are in use worldwide. When it comes to natural catastrophes, there is no room for error in light of the potentially serious consequences: The technology employed must perform solidly over the years. For this reason, every system is connected to Geopraevent servers to ensure fault-free operation.

This also applies to the system commissioned in 2011 for monitoring the Plaine Morte glacier in the Bernese Alps. As soon as temperatures rise in spring, the glacier begins to melt (see video). From this melting water, three lakes (the Faverges, Vatseret and Strubel) form each year, which then swell constantly over the summer months before finally emptying again.

Danger to the nearby municipality of Lenk, which commissioned the project, arises mainly from the Faverges lake. Like the other two lakes, it exists only in the warmer seasons. After its annual recurrence as a result of snow and glacier melt, the water warms up in the months that follow and then seeks an outflow through the ice. Little by little, this outflow channel becomes further thawed away, meaning that the flow rate constantly increases. In August 2014, for example, some 20 cubic meters of water per second swept down the Trüebach in the direction of Lenk. After emptying of the glacier lake, the cycle will then begin anew the next spring with the onset of the thaw.

To predict a glacial lake breakout and initiate appropriate protective measures, a monitoring system was installed by Geopraevent which ensures an early warning period of one to two days. In the realization of this project, due to outstanding properties of long-term stability and others, STS sensor technology has also been relied upon.

To be able to realistically estimate the danger posed by these glacial lakes at all times, a total of four measuring stations were set up: One each on the three lakes, as well as one on the Trüebach, down which the water flows towards the municipality of Lenk during a glacier lake discharge.

The water level of the three glacial lakes is monitored by means of pressure sensors. To this end, the measuring instruments are submerged into the deepest part of each lake by a helicopter. The level sensors ATM/N/T are connected via a cable to data loggers mounted on a ridge. The data loggers used in this case are solar powered and their collected data is transferred to Geopraevent via mobile telephony. Should the data logger convey dropping levels, this is a clear sign of emptying in the corresponding glacial lake. 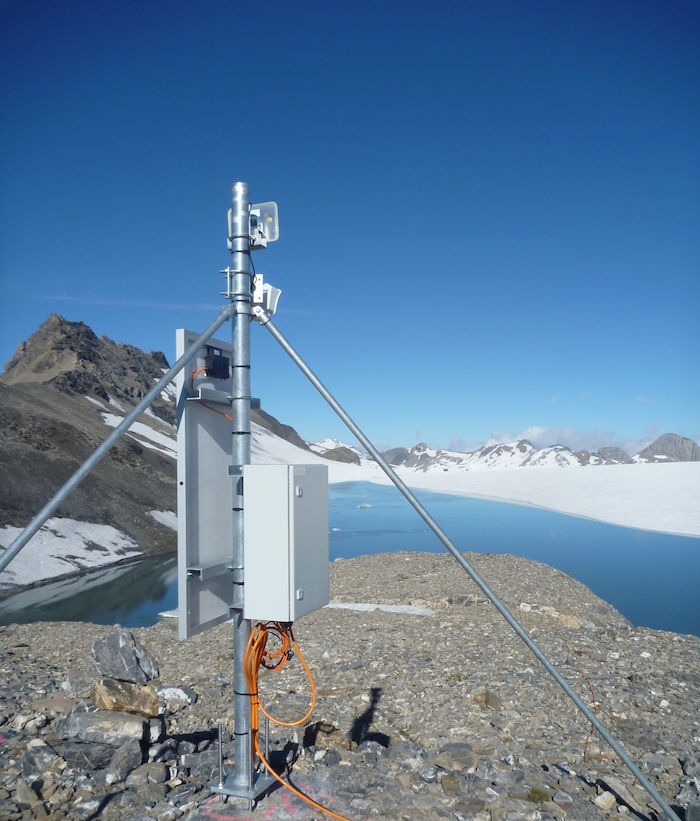 Besides lake-level measurement, a level radar also monitors the fill level of the Trüebach. This additional measuring station serves to verify that the glacier lake is also actually emptying out towards the municipality itself. Since the Trüebach passes through a ravine, the level radar is attached to a steel cable stretched across the ravine and is also connected to a datalogger via a cable.

As soon as the pre-defined limit values are undershot or exceeded in the lakes and the Trüebach, those responsible in the community of Lenk are informed automatically by SMS and can then take appropriate measures to prevent flooding.