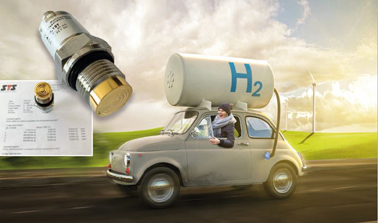 Many experts are seeing hydrogen as the ideal substitute for coal, oil and natural gas in industry and transport, as it leaves practically no exhaust gases when burned. This versatile element is already used successfully in various industrial sectors. However, the handling of hydrogen gas puts high demands on the technical components used, and specifically on pressure transmitters.

The energy transition gets another pillar with hydrogen – in addition to renewable energies and energy efficiency. Hydrogen produced with renewable energies is a sustainable, flexible and easily transportable energy carrier. In addition to the German government’s current support programs, seven billion euros are invested to ensure that hydrogen becomes established on the market. A further two billion have been allocated for international partnerships. The focus is on so-called green hydrogen, which is produced exclusively with renewable energy. Only by means of green hydrogen, the CO2 emissions can be reduced using low-carbon energy sources. In Europe, 9.8 million metric tons of hydrogen are currently produced annually using mostly fossil fuels. Therefore, the EU Commission has set itself the goal of increasing the production of clean hydrogen to one million tons per year by 2024 and to ten million metric tons by 2030.

The production process of hydrogen

Hydrogen occurs in nature in combined form and is not easy to obtain. If it is used as a gas, the combination of hydrogen and oxygen has to be split up. But this electrolysis process, which chemically separates hydrogen and oxygen, requires a lot of energy. If electricity from solar plants or wind turbines is used, it is called “green hydrogen”. If the electricity comes from fossil fuels, the resulting hydrogen is called “gray hydrogen”.

Hydrogen is already used on a large scale by industry. In this case, however, it is not used as an energy carrier, but primarily in basic chemistry and petrochemistry in the context of stoichiological production processes. The hydrogen used in these applications is mainly referred to as gray hydrogen, which is produced by electrolysis processes or mostly as a by-product, e.g. in refineries.

Pressure sensors for hydrogen: what needs to be considered?

Regardless in which way hydrogen is produced and used, the handling of this element is very demanding in terms of technical solutions. Above all, working with hydrogen in its gaseous state is a challenge. Hydrogen is the element with the lowest density and the smallest atomic radius. This results in a fundamental problem in the handling of the gas: its extremely high permeation rate. Metallic materials are permeated by hydrogen, which has a negative effect, for example, on the use of pressure sensors. Piezoresistive transducers operate with an oil-filled housing with a thin steel diaphragm. If the hydrogen diffuses through this membrane and it accumulates in the transducer, the latter will be damaged or even destroyed in the long term. In the worst case, the hydrogen can even penetrate the entire sensor, creating an acute explosion hazard.

“Even doubling the thickness of the membrane leads at best to a doubling of the diffusion time,” knows our expert, founder of STS Sensor Technik AG. “However, the standard gold coating of the stainless steel membranes of our pressure transmitters in contact with hydrogen allows us to increase the time until a critical volume of hydrogen is reached in the transducer by a factor of 10 to 100. In this way, we significantly increase both the safety and the service life of the sensor.” This is due to the fact that the hydrogen permeability of gold is 10’000 times lower compared to steel.

Gold coating of the membrane – the slight difference

How does it work?

The permeability of gold is about 10,000 times lower than that of stainless steel. With a 1μm gold coating on a 50 μm steel membrane, hydrogen permeation can be reduced more effectively than by doubling the membrane thickness to 100 μm. In the first case, the time to reach a critical volume of hydrogen gas accumulated inside the pressure sensor can be increased by a factor of 10 to 100, in the second case only by a factor of two. The prerequisite for this is a completely closed system and a defect-free coating.

The piezoresistive pressure transmitter ATM.1ST  is suitable for static and dynamic pressure measurement in hydrogen applications. Its measuring ranges are between 0 … 50mbar and 0 … 1000 bar, the accuracies range up to 0.05%FS, hysteresis and repeatability are better than 0.01%. Due to its modular design, the pressure transmitter ATM.1ST can be individually adapted to many applications.