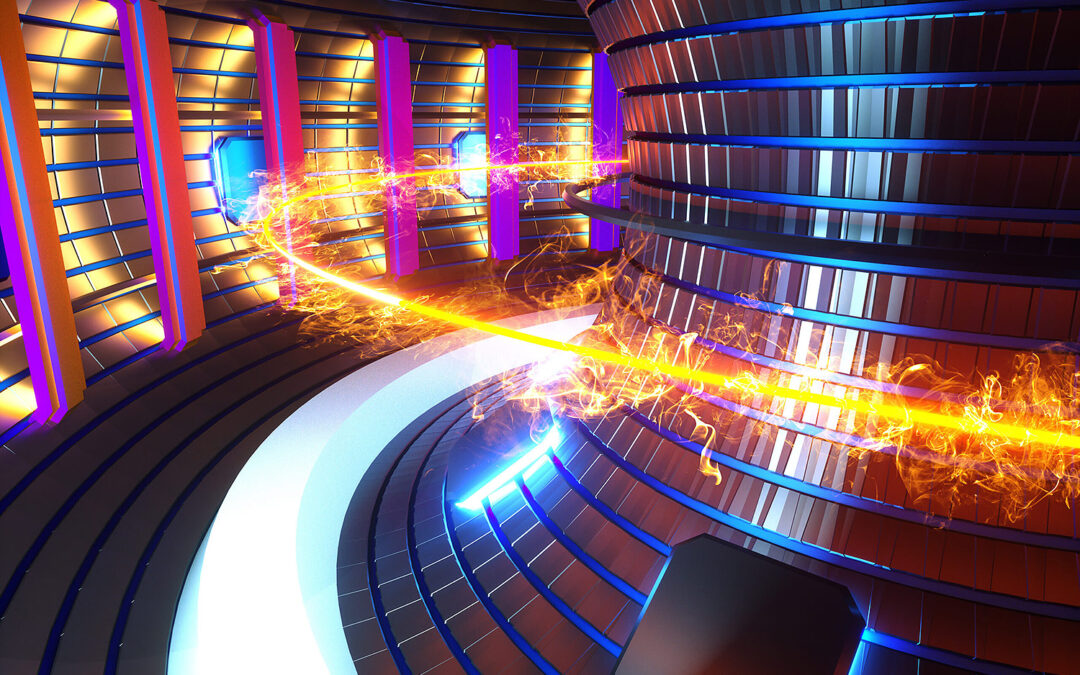 ITER (“The Way” in Latin) is one of the most ambitious energy projects in the world today.

In southern France, 35 nations* are collaborating to build the world’s largest tokamak, a magnetic fusion device that has been designed to prove the feasibility of fusion as a large-scale and carbon-free source of energy based on the same principle that powers our Sun and stars. The ITER Members—China, the European Union, India, Japan, Korea, Russia and the United States—are now engaged in a 35-year collaboration to build and operate the ITER experimental device, and together bring fusion to the point where a demonstration fusion reactor can be designed.

WHAT WILL ITER DO?

2) Achieve a deuterium-tritium plasma in which the reaction is sustained through internal heating
Fusion research today is at the threshold of exploring a “burning plasma”—one in which the heat from the fusion reaction is confined within the plasma efficiently enough for the reaction to be sustained for a long duration. Scientists are confident that the plasmas in ITER will not only produce much more fusion energy, but will remain stable for longer periods of time.

3) Test tritium breeding
One of the missions for the later stages of ITER operation is to demonstrate the feasibility of producing tritium within the vacuum vessel. The world supply of tritium (used with deuterium to fuel the fusion reaction) is not sufficient to cover the needs of future power plants. ITER will provide a unique opportunity to test mockup in-vessel tritium breeding blankets in a real fusion environment.

Fusion is the energy source of the Sun and stars. In the tremendous heat and gravity at the core of these stellar bodies, hydrogen nuclei collide, fuse into heavier helium atoms and release tremendous amounts of energy in the process.

Twentieth-century fusion science identified the most efficient fusion reaction in the laboratory setting to be the reaction between two hydrogen isotopes, deuterium (D) and tritium (T). The DT fusion reaction produces the highest energy gain at the “lowest” temperatures.

Three conditions must be fulfilled to achieve fusion in a laboratory: very high temperature (on the order of 150,000,000° Celsius); sufficient plasma particle density (to increase the likelihood that collisions do occur); and sufficient confinement time (to hold the plasma, which has a propensity to expand, within a defined volume).

At extreme temperatures, electrons are separated from nuclei and a gas becomes a plasma—often referred to as the fourth state of matter. Fusion plasmas provide the environment in which light elements can fuse and yield energy.

In a tokamak device, powerful magnetic fields are used to confine and control the plasma.

WHAT IS A TOKAMAK? 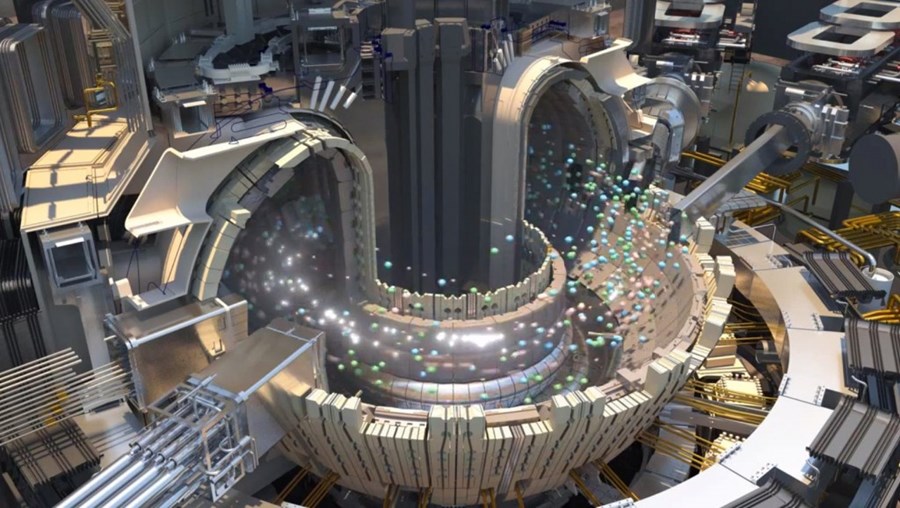 Power plants today rely either on fossil fuels, nuclear fission, or renewable sources like wind or water. Whatever the energy source, the plants generate electricity by converting mechanical power, such as the rotation of a turbine, into electrical power. In a coal-fired steam station, the combustion of coal turns water into steam and the steam in turn drives turbine generators to produce electricity.

The tokamak is an experimental machine designed to harness the energy of fusion. Inside a tokamak, the energy produced through the fusion of atoms is absorbed as heat in the walls of the vessel. Just like a conventional power plant, a fusion power plant will use this heat to produce steam and then electricity by way of turbines and generators.

The heart of a tokamak is its doughnut-shaped vacuum chamber. Inside, under the influence of extreme heat and pressure, gaseous hydrogen fuel becomes a plasma—the very environment in which hydrogen atoms can be brought to fuse and yield energy. The charged particles of the plasma can be shaped and controlled by the massive magnetic coils placed around the vessel; physicists use this important property to confine the hot plasma away from the vessel walls. The term “tokamak” comes to us from a Russian acronym that stands for “toroidal chamber with magnetic coils.”

First developed by Soviet research in the late 1960s, the tokamak has been adopted around the world as the most promising configuration of magnetic fusion device. ITER will be the world’s largest tokamak—twice the size of the largest machine currently in operation, with ten times the plasma chamber volume.

WHEN WILL EXPERIMENTS BEGIN? 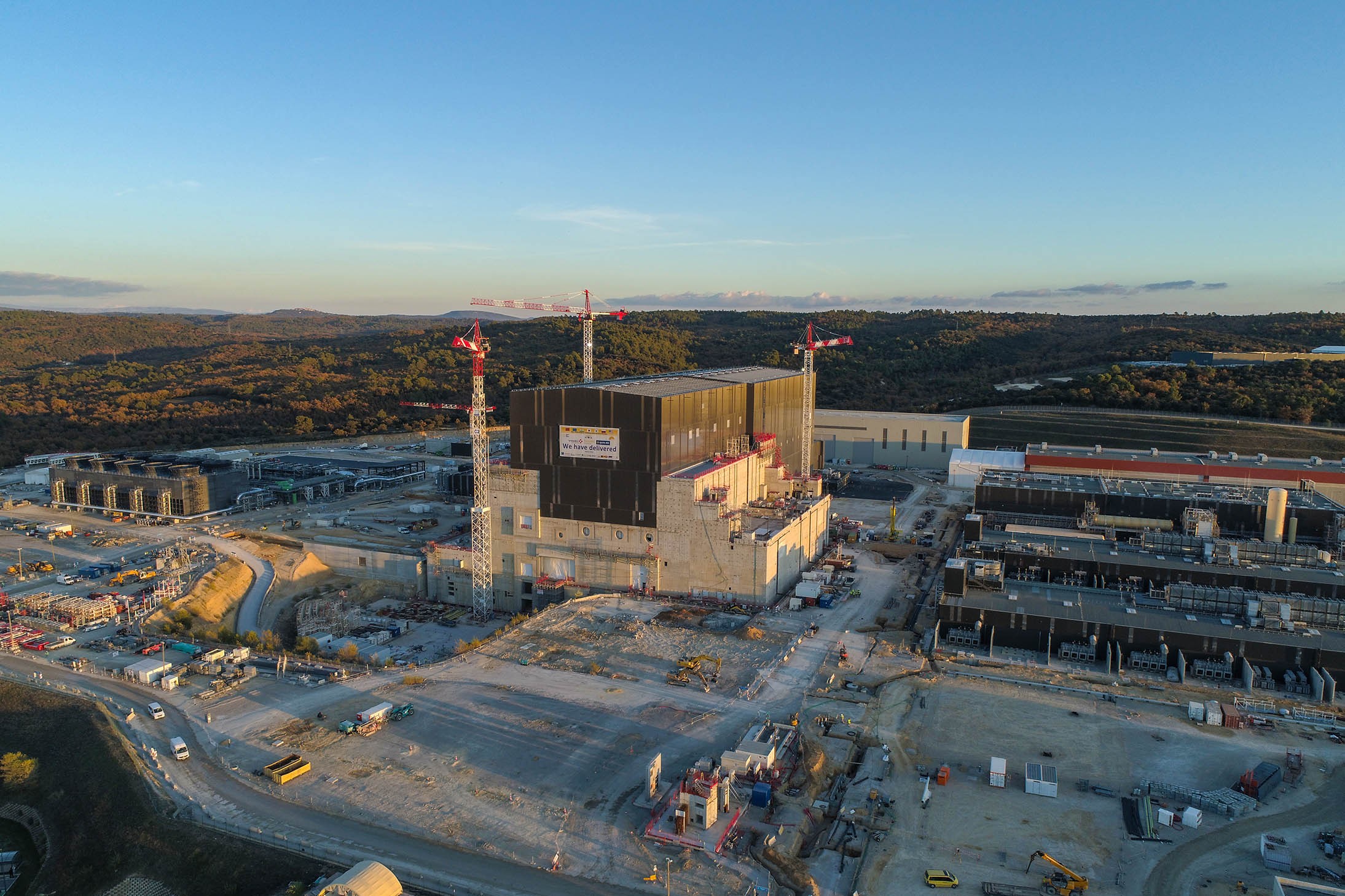 That will be the first time the machine is powered on, and the first act of ITER’s multi-decade operational program.

We invite you to explore the ITER website for more information on the science of ITER, the ITER international collaboration and the large-scale building project that is underway in Saint Paul-lez-Durance, southern France.