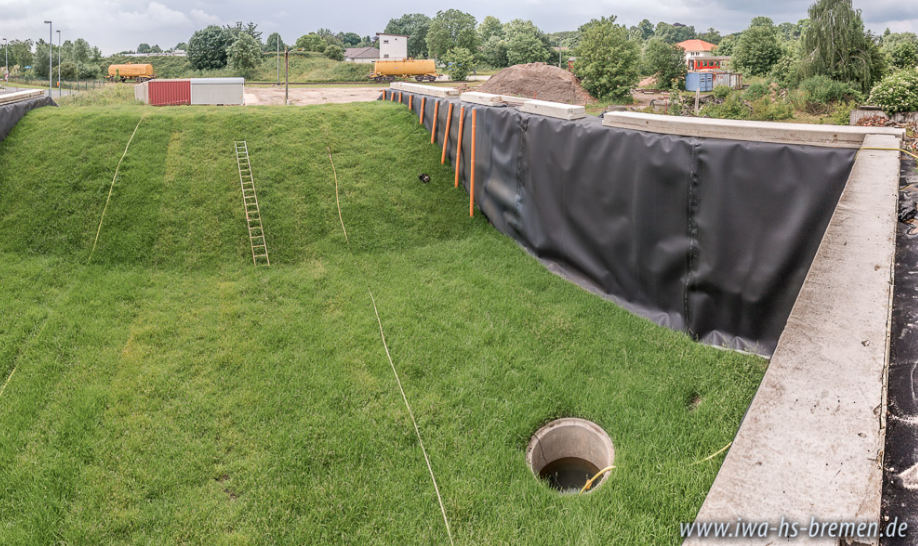 In extreme flood situations, the hopes of those people affected lie solely with the dykes – will they hold or not? A dyke failure like the 2013 flood in Fischbeck (Saxony-Anhalt) caused immense damage to inland areas, which continue to have an impact to this day. The active research project DeichSCHUTZ (dyke protection) at the Bremen University of Applied Sciences is involved in an innovative dyke protection system that could prevent failures of this kind.

In Germany alone, river dykes safeguard many thousands of kilometers of waterfront lands. From today’s technological perspective, dykes consisting of three zones are being constructed. The individual zones, viewed from the water-side to the land-side, are built with steadily increasing porosity, thus affording good drainage of the dyke body during a flood event. In Germany, however, many older dykes of homogenous construction do still exist, such as the dyke breached during a flood of the River Elbe in June 2013 in Fischbeck. In contrast to the 3-zone dykes, older ones are particularly vulnerable to prolonged flood conditions. Water seeps into the dyke itself and its saturation line rises further within the dyke body over extended periods of high water. The further this saturation line rises, the more the ground material is subjected to buoyancy. The dyke thus loses its own essential self-mass, required to counteract against the pressure of high water.

Stabilization of a breach-prone dyke requires enormous resources in material and personnel, as well as time, which in acute flood situations is a scarce commodity.  Backup procedures are thus required, which, in terms of personnel, materials and time commitment, are more effective than layering sandbags on the landward side of the dyke.

Christopher Massolle of the Institute for Hydraulic and Coastal Engineering at the Bremen University of Applied Sciences is developing a solution that can considerably reduce the input of time and personnel. With the DeichSCHUTZ research project, sponsored by the Federal Ministry for Education and Research, an innovative, mobile dyke protection system is being tested for stabilizing dykes during flooding events. Measurement technology supplied by STS is also playing a role here.

To assess the mobile dyke protection system, a test-dyke has been built on the premises of the Agency for Technical Relief in Hoya. To this end, a U-shaped retention basin holding some 550 cubic meters of water has been constructed, at whose end sits a dyke.

As can be seen in the video, numerous pipes have been deployed at the left side of the dyke. Within these pipes rest ATM/N Level Sensors produced by STS. In the test arrangement, the retention basin is filled with groundwater. Under conditions approaching reality, the water should rise to a level of 3 meters over a period of 30 hours. The submersible level sensor ATM/N  now measure development of the saturation line over this time. With a pressure range from 1 to 250 mH2O and an accuracy of ≤ ± 0.30 %FS (-5 to 50 °C), this is recorded down to the very last centimeter. When the saturation line no longer continues to rise, the mobile dyke protection system is introduced to the water-side slope and should prevent the further penetration of seepage water. The dyke body now continues to drain and the extent of the resulting shift in the saturation line is to be measured by the level sensors employed. It is from these measured results that the functionality of the protection system can lastly be assessed.